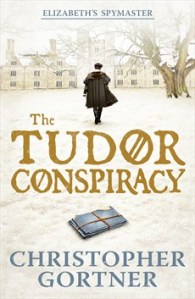 As part of the blog tour for The Tudor Conspiracy (see my review HERE), I asked the author, Christopher Gortner, a few questions which he was kind enough to take time out of his very busy schedule to answer. Thank you, Mr Gortner!

(You can see my previous interview with C W Gortner HERE, along with my review for The Queen’s Vow HERE.)

The Spymaster Chronicles are set during the Tudor period, focusing on the legitimate children of Henry VIII. What drew you to that particular period, and what do you enjoy most about it?
I find that while the reigns of Henry VIII and Elizabeth I are, to a certain extent, well covered in fiction, the so-called forgotten Tudors, Edward and Mary, are far less so. I have always loved the Tudor era, ever since I was a child growing up in southern Spain. I read voraciously about the Tudors and found the tumult, the drama, and far-reaching consequences of this relatively short-lived dynasty fascinating. I decided to set the first two books of the Spymaster Chronicles in Edward VI’s and Mary I’s reigns because the realm underwent significant upheaval in a short span of time. Issues of faith, economic, social and political uncertainty were all at play, and Elizabeth herself – a major figure in these novels— found herself in some of the most perilous situations of her life, without recourse to her power yet as a queen. This time-period offers a wealth of situations for a novelist with a fictional spy to engage with; it just seemed the perfect milieu for Brendan and his friends.

The court intrigue and political upheaval of the Tudor period always make for an exciting setting. How long did it take you to do all the research on the real historical figures in the book, and how many liberties (if any) did you take with factual evidence?
Research for every book I write can take years. I’m fortunate in that I’ve been studying and exploring this era for most of my life, so some of the heavy research work has already been done. Elizabeth is such a charismatic yet enigmatic subject; as much as has been written about her, we still don’t know many telling answers, such as, in The Tudor Conspiracy, how involved was she in the plot to depose her sister? It makes for amazing conjecture. With the Spymaster books, while I ground the events in actual historical incidents, I do take liberties with the time-line and circumstances surrounding them, mostly to facilitate the ease of the reader, as things can get very confusing. These books are spy thrillers and my lead character Brendan must uncover secrets that are not recorded for posterity. However, that said, I strive to remain true to my actual historical characters and what is known about them, while fitting them into the plot. In particular, I do my best to show them in their complexity, as fallible flesh-and-blood people with weaknesses and vulnerabilities, as well as strengths. I also want to show the brutality lurking under the glamour of the era. The Tudor era was not an easy time to be alive and the court was often a snake pit of rivalries and machinations, where power was the only coin. Everyone had an agenda and you had to tread very carefully in order to survive. Brendan learns this the hard way.

Brendan Prescott is a very likeable and “normal” kind of guy whose sensibilities often seem very forward by the standards of the time (possibly very contemporary to our own modern day sensibilities). Is he based on anyone you know? Or is he a composite of real historical figures? How did you go about blending such a modern personality with an historical setting?
He is purely imaginary, though I suppose he does share some of my personality traits. For example, he likes animals and is loyal, often to a fault; he doubts his own abilities and wonders if he’s doing the right thing. He’s a stranger in his own land with a deadly secret, a permanent outsider who has to cultivate a keen eye and ear. I wanted him to be a 16th century man with a modern-like sensibility because he offers a fascinating juxtaposition to those around him. I do think there were some men like him in the Tudor era, albeit rare ones; and he is the exception to the rule, which is the principal reason he gains Elizabeth’s trust. She sees in him someone she can depend upon, who is not like anyone else she knows.

Do you enjoy the promotional side of things, such as public readings and signings? If so, which has been your most enjoyable experience?
I do enjoy promotion. It can get tiring, particularly as you’re often writing the next book at the same time as you’re doing events, but meeting readers is always a joy and an honor. I feel very privileged to be able to write for a living; it’s never a guarantee that every writer will make an impact, much as we wish otherwise. One of my most enjoyable experiences was the Historical Novel Society’s conference in the UK in 2012. I had not been to a UK-based conference before and had the honor to speak there. I also met many UK historical writers I admire, and I always love visiting London.

What inspired you to historical fiction? And why do you think this genre appeals to so many readers? Are there any other genres you plan on trying?
Growing up in southern Spain, there was history all around me. I lived near a ruined castle that had belonged to Isabella of Castile and visited many historical sites in Europe as a child. I read voraciously, as well, in particular historical fiction, so when the time came to try my hand at a novel, historical fiction seemed the natural choice. I think the genre appeals to so many readers for the same reasons it appeals to me: historical fiction clothes the skeletons of the past with emotion, dramatizes the bare bones of fact and allows us to experience the past in a visceral way. We find that these people who are either just names in books or legendary figures veiled by myth are, in fact, human beings like us, who suffer and aspire and yearn for many of the same things we do.

As for other genres, I do hope one day to write a supernatural thriller, as well as a family saga. I already have some preliminary plot ideas, so let’s see how they develop.

Thank you for hosting me during my virtual tour. I hope your readers will enjoy THE TUDOR CONSPIRACY. To find out more about my work, please visit me at:  www.cwgortner.com

My thanks, again, to Mr FGortner and his PR team for inviting me to be part of this blog tour.

2 thoughts on “BLOG TOUR: Another interview with Christopher Gortner”

Got something to say? Cancel reply

I am a blood donor

I review for NetGalley

What do you want to find?

Other Places of Interest